The German-Arab Knowledge Transfer Colloquium hosted by the Centre for Logistics and Traffic (ZLV) of the University Duisburg-Essen (UDE) has united professors and PhD students from the MENA Region and the UDE-network during a ten-day programme leading through urban challenges in the sectors of “Water, Energy and Food” and the big task of conceptually combining their functional domains, referring to the concept of “Water-Energy-Food Supply Nexus”. The colloquium, held in December 2017 and funded by the DAAD with means of the Federal Foreign Office, challenged the German-Arab group of experts to detect the biggest obstacles against and develop first steps towards a sustainable W-E-F Nexus in the MENA Region in terms of knowledge, practice and decision making. Ever since the event, several dialogues have been initiated between Arab participants, the UDE and external experts continuing the overarching objective.

It was yet the second German-Arab Knowledge Transfer Colloquium the Centre for Logistics and Traffic (ZLV) of the University of Duisburg-Essen (UDE) held in Duisburg at the end of 2017. During a ten-day programme funded by the DAAD with means of the Federal Foreign Office the participants presented their research topics within the scope of the Water-Energy-Food Supply Nexus in the Middle East & North Africa, short “MENA” Region, whereas experts from the UDE and the broader transdisciplinary ZLV-network were invited to present insights into selected projects and activities and to discuss the daily input with the guests under the umbrella question: ‘’What are the critical obstacles in terms of knowledge, practice and decision making in the face of achieving a sustainable Water-Energy-Food Nexus, and what could be the first steps?’’.

The foreign participants from Jordan, Morocco, Egypt and Iraq, amongst whom were professors as well as PhD students, shared each one’s state of the art research with the group. On the one hand, it became clear that the essential urban structure of water, energy and food in the MENA Region have been heavily affected by rapid urbanisation, political restraints or natural factors such as climate change. Moreover, management capacities in the region still highly depend on foreign knowledge to be adopted to local conditions. On the other hand, the presentations introduced solution-based research from highly motivated and talented researchers from the MENA Region who are dedicating their work to solving major urban threats both from governance and technological perspectives. All efforts unite under the intention to foster sustainable innovation practices in the region.

Special insight knowledge about the MENA Region, which were especially revealed during the panel discussions at the end of each day, as well as the variety of perspectives and expertise between the countries helped giving a holistic view on problems in the region, explore possibilities and deadlocks in the development process. The participation of Gregory Sixt from the US –  who worked as a consultant with the Stockholm Environment Institute (SEI) on Water-Food-Energy Nexus planning in MENA countries – was of a great benefit to the group, since he already had a wide view on governmental and social aspects in the region, especially in Jordan.

The Arab region is currently in critical challenge for social and political change towards more sustainable conditions. In this regard, The German-Arab Transformation Partnership by DAAD is highly acknowledged and exploited as an opportunity to create additional opportunities for the efforts of Arab higher education institutions. Months after the colloquium, the ZLV and partner universities have initiated several co-operations, continuing the scientific knowledge dialogue which started in Duisburg. The ongoing contact with the colloquium’s participants shows the success of the whole project as one of the major achievement of the colloquium was to establish a sustainable German-Arab scientific network. On the long run this network is supposed to improve knowledge capacities necessary to achieve sustainable development in the Arab region, characterized by a stable interaction between academy, governance and industry. The range of already initiated collaborations between the partner universities and the ZLV lasts from upcoming PhD-student-exchange to elaborating conjointly research proposals. 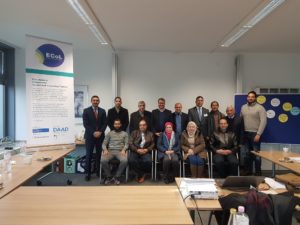