Looking back on the ECoL Summer School on Port of the Future, August 21st-27th, 2016, Duisburg

After the first Emerging Concepts of Logistics Summer School in Istanbul last year at the Koç University, the second one took place in Duisburg at the University of Duisburg-Essen this August. Conjointly organized by both universities and sponsored by the leading logistics company duisport, ECoL Summer School enabled a multidisciplinary working environment for young academics from Egypt, Germany, India, Iran and Turkey.

The main objective of the Summer School was to work collaboratively in small groups with other research peers under the supervision of a professor in order to produce new and progressive ideas regarding the Port of the Future concept. The summer school schedule was arranged in a way to enable the necessary data collection via statements from speakers with various backgrounds such as science, industry and public policy and as well via excursions to industrial ports before starting the group work, in order to feed the group projects.

The six day program of ECoL Summer School 2016 was structured into three parts:

The first part consisted of two days which started with an introductory day and presentations by lecturers, followed by the participant presentations on day 2, where participants had the chance to receive feedbacks regarding their presentations with topics varying from Vehicle Routing Optimization, The Future of the Supply Chains, 3D Printing and Port Logistics to Green Strategies for the Ports and Truck Parking in the Vicinity of Logistics Hubs. Lecturers gave insights from different perspectives as an inauguration on the first day. Prof. Dr. Michael Manitz, Vice President of the Centre for Logistics & Traffic (ZLV) of the University of Duisburg-Essen (UDE),  delivered a speech about state-of-the-art research conditions and purposes at the UDE  and the historical development of the Ruhr Area. Prof. Dr. Metin Türkay, co-founder of the ECoL Concept from Koç University in Istanbul presented the ECoL strategy and the initial formation of the ECoL idea as an ever growing concept behind. Following the preamble presentations, as a part of the triple-helix structure of the ECoL concept, guest lecturers with science, industry and public policy backgrounds from various institutions made their statements before the start of the welcome reception in the early evening at the Gerhard-Mercator-Haus of the UDE sponsored by duisport. The topics of the statements from the guest lecturers covered a wide range of contemporary logistics concerns from “Climate Change Impact on Supply Chains” to “Port Challenges in Today’s Global Supply Chains” the latter of which being delivered by the Germany representative of the Port of Antwerp. Having the main topics corroborated with the supportive notions from speakers, the lecturers and the participants of the ECoL Summer School 2016 have exchanged first impressions about presumptive group project themes regarding Urban Hub, Energy Hub, and Digital/Service Hub, on the second day concurrently with the individual presentations of the participants. The closure of the first part was made with a social event at the Inner Harbour of Duisburg, which is a successful urban transformation example from an industrial port to a recreational public quarter containing leisure activity areas, museums and restaurants. 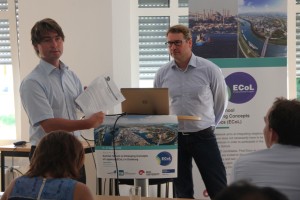 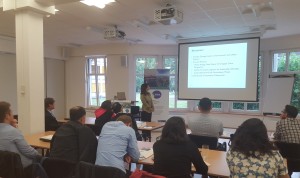 The second part of the summer school helped the participants to comprehend how port logistics function under the supervision of leading logistics corporations duisport and Schnellecke via a whole day long excursion opportunity, followed by a cultural event in the early evening scheduled by the organizers to introduce the participants to the unique industrial landscapes and heritage of Duisburg. As a heavy industry region, Duisburg used to provide employment to the inhabitants of the district with its numerous plants. Nowadays, most of the industrial premises have become an articulation to the cityscape and is one of the main tourist attractions of the area due to the cultural legacy. 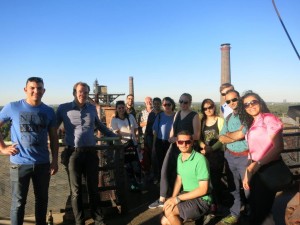 The third part consisted of three days as an intensive group work process under the supervision of lecturers Prof. Dr. Metin Türkay (Koç University) on Urban Hub, Prof. Dr. Bernd Noche (University of Duisburg-Essen) on Energy Hub and Prof. Dr. Thomas Hanke (FOM University) on Digital/Service Hub which culminated in group presentations about the developed ideas during the summer school. The results of this phase were a reflection of the multilayered interdisciplinary concept of ECoL network. The Urban Hub group approached the notion of Future Urban Hub from an idealized urban infrastructure planning point of view by describing the anticipated characteristics of it, while stressing the importance of urban integration and space sharing, whereas the Energy Hub group created a so-called Resource Network Hub system to enhance the integration of repurposed materials into the current resource flow of producing companies in all sectors. Furthermore, the Digital/Service Hub group outlined an extensive categorization framework for the route from the current port structures to the prospective future ones with the state-of-the-art technological developments. 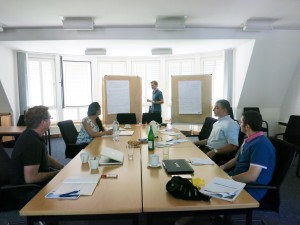 Upon the completion of issuing the certificates of participation following the final presentations as a result of three days of working in groups; the participants, the lecturers and as well as the organizers of the ECoL Summer School 2016 bade farewell to each other with eager expectations to be a part of the class of 2017 as well.